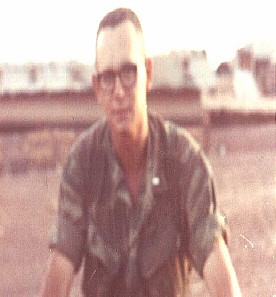 2nd Lt. Forest Lucy was Hotel Company's forward observer, the main man to call in artillery for the grunts out in the Bush. He was more then just an artillery fire mission assistant to call in a fire mission when we got ambushed or attacked by overwhelming odds, he knew all artillery frequencies from air strikes to the New Jersey Battle Ship that we used occasionally when the heat got turned up by the NVA or VC. He was a comfort for any grunt to have on a patrol as he called his fire missions in directly to the fire bases, saving 20 minutes of wait time in order to get the first spotter round over the target. He got them in five minutes or less and would call ahead for pre planned fire missions from areas that looked like good ambush sites for the enemy so if they were in one of his pre called sites, the rounds came instantly never giving the VC or NVA a chance to run for it.

Forest Lucy was an Officer in the United States Marine Corps and was awarded such respect from the troops but we felt as if we could talk to him and he would give us important information to help us out in calling in future artillery strikes if he wasn't able to be with us. He worked with a Lance Corporal who we didn't know too well but the two of them were very tight and would go out on a lot of patrols together. Getting hit with them along made it almost worth it the way they would get artillery right on the enemy and walk it all over him. It began to make Charlie a bit gun shy when it came on ambushing Marines coming out of Battalion Area and going on their patrols.

2nd Lt. Lucy was born in Wichita Falls, Texas and grew up near there. He joined the 90th Special Rifle Company of the U. S. Marine Corps Reserve in January 1960 and went to Boot Camp in San Diego the following month. Following active duty for training, he was initially assigned as a company runner because they didn’t have radios down to the platoon level and was very happy to become a machine gunner even if it did mean lugging around a .30 caliber Browning machine gun. He finished the MCI course on the 1919A4 Browning machine gun one month before the Marine Corps gave the M60 Machine Gun to his reserve unit. When the Marine Corps Reserve reorganized into the 4th Marine Division the same Marines in the same unit in Wichita Falls, Texas went to drill one weekend and found six 105 mm howitzers on what had been their “grinder.” Now the old 90th Special Rifle Company was Golf Battery, 2nd Battalion, 14th Marines. That started a love for the artillery that never ended. Forest served in the Reserve until mid-1967 and rose to the rank of sergeant.

While in college and in the Marine Corps Reserve, Forest was employed in Dallas, Texas by the Federal Bureau of Investigation. There, he met his wife. He worked at night as a Teletype operator and she was a stenographer for the FBI in the daytime. They saw each other enough to have two sons, however. Following graduation from the University of Texas at Arlington, Forest went to Marine OCS in Quantico, Virginia where he was commissioned a second lieutenant and sent to Vietnam via Fort Sill, Oklahoma where he was trained as an artillery officer.

In Vietnam, Forest was actually a member of Bravo Battery, 1st Battalion, 11th Marines assigned as a Forward Observer to Hotel Company, 2nd Battalion, 1st Marines. He stayed in Hotel Company from early September 1968 until early January 1969 when he was promoted to first lieutenant and reassigned to the battalion headquarters of 2/1 as an artillery liaison officer. Prior to departing Vietnam in September 1969, on the same day that Ho Chi Minh died, Forest was the Executive Officer of Bravo Battery and for his last six weeks in country the Logistics Officer (S-4) of 1st Battalion, 11th Marines.

Immediately following Vietnam, Forest went back to Fort Sill, Oklahoma where he was an instructor at the artillery school. He taught gunnery and battery tactics. He later commanded an artillery battery in Guantanamo Bay, Cuba and Camp Lejeune, North Carolina and held command and staff officer positions in North Carolina, Virginia, Oregon, and Headquarters Marine Corps prior to his retirement. Highlights of his career were the tours of duty in the Middle East where he was a Military Observer with the United Nations Truce Supervision Organization (UNTSO) in 1974-75, G-2 and J-2 for the Multi-National Force and Joint Task Force Lebanon immediately following the bombing of the Marine barracks in Beirut, 1983-84, Force Marine Office with the Commander Middle East Forces in the Persian Gulf, 1986-87, and as G-2 with I Marine Expeditionary Force during the latter part of Desert Shield and Desert Storm, 1990-91. Forest retired in 1992 as a colonel following his assignment as the Director of the Marine Corps Intelligence Center at Quantico while the center was being initially established. He returned to Texas where he is a project manager in the telecommunications industry in Dallas. He is extremely proud of his association with the young Marines and Corpsmen of Hotel, 2-1, during the Vietnam war, and he will never forget them.