2nd.Lt. Bergeron was killed the same day. I spent two weeks at N.S.A DaNang and then went back to the platoon.

I didn't know his name (it was his first day) until a couple of years ago.

And I am still trying to get him recognized.

He was our Platoon Corpsman

He died trying to help a wounded Marine

Chester was only with our Platoon (1st Platoon Hotel Company, 2nd BN 1st Marines) for a short while; but, he very quickly became a member of the Team. We respected his knowledge and his skills as a Corpsman. He was a good man that gave his life for his Country. I will always remember him and the day he was killed.

You will Always Be Remembered

I never had the opportunity to know Clyde but met his Mother, sister, and friends in Ville Platte this past weekend. While honoring the Vietnam Vets at the festival, I noted that after all these years the pain in their faces was just as evident as it must have been the day they found out he made the ultimate sacrifice for his country. AS a Vietnam Era Marine, I was so proud to be standing next to the Family of Clyde Fontenot. It was obvious that while he was gone, he WILL NEVER BE FORGOTTEN. Semper Fi, Clyde. 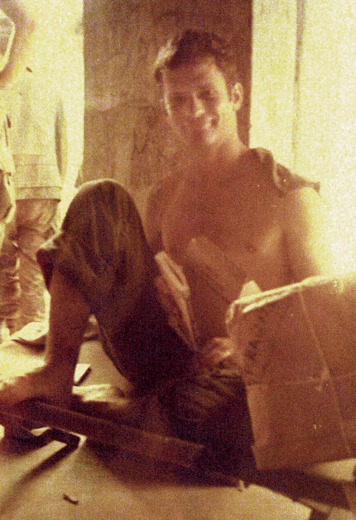 Back in 1967, I (“Doc” Jack Stone) was transferring from a Colorado college to the University of Maryland, and began to feel a draft at the back of my neck. To avoid the chance of becoming an Army draftee grunt, I joined the Naval Reserve in Baltimore, July 17, 1967. Overall I served 7 years.

The Navy was looking to fill the ranks of submarines, and I was interested – till I got on the WW2 trainer they kept docked. No humongous comfy modern nuke, but still, just the idea of being in a submerged metal tube for months had no appeal.

From a medical family, though not myself interested in a long-term medical career, I then joined the Hospital Corps. With the Vietnam War raging full tilt, it seemed like a roll of the dice as to whether I’d eventually be transferred to the Marines. But, better to be in the Marines than in the submarines.

Sure enough, soon after boot camp and then Hospital Corps School at Great Lakes Naval Training Center near Chicago, I got orders to Camp Lejeune, finishing the condensed version of Marine Corps boot camp as an MOS 8404 Field Medical Technician. And by now I had a newly pregnant wife, Kim.

Then it was off to extensive first-hand medical experience at Bethesda Naval Hospital and Portsmouth Naval Hospital, New Hampshire. There were many Vietnam casualties. Long hours and dreadful wounds, living with Kim in a tiny WW2 shipbuilder’s cottage.

After a year of this grueling duty, I got orders to join a Marine Corps unit in Danang, RSVN, July, 1968. It turned out to be 3rd Platoon, Hotel Co., 2/1, 1st MarDiv. After a few days of getting oriented, supplied, acquainted with the huge divsion installation grounds, I went by jeep and Amtrac to Camp Big John and the Cua Viet River outpost.

After sleeping in a dugout trench the first night in the tree line, I was greeted the following day by Marines carrying two village kids with protruding belly wounds. They’d been playing with unexploded ordnance. That was when Vietnam actually began for this “Doc”. From then on it was battalion operations, company and small unit patrols and ambushes – night and day.

Swimming in the river to cool off one day two weeks in country, somebody yelled from shore that my daughter had been born at Bethesda. I was glad I’d sent the congratulations to Kim “and Laura” a week or two previous, and it had arrived on the very day of birth.

Eventually the battalion moved down the long road to Danang and further south, from Quang Tri to Quang Nam - a far cry from the DMZ and Con Tien. We got settled in and began working a very different sort of AO, with lots of paddies and sand.

The details and dates of all the incidents, the interactions, the gear, even many of the personalities are blurring now with age. I thought this would never happen - how could such dramatic, adrenaline-pumping “war story” actions ever fade from the memory? The truth is, when you’ve got a baby at home and you’re dealing with sudden loss of friends, and general death and dismemberment for most of a year, it’s not something you want to remember.

In fact, upon return to the States, I did everything possible to forget. Working 18- and 24-hour shifts, living fast and risky, taking a drink now and then, sleeping little and light – what’s new? When so much is intentionally blocked from the mind, it tends to dim over time. Then again, the grief and the anger of it can pop up unexpectedly and occasionally in violent and very inappropriate ways. It certainly took its toll over the years. Not surprisingly, I found this to be true of many other guys when I finally “came out of the woods” way late in 2007. Meeting regularly in a group at the Vet Center has helped more than anything. At last …. somebody else who understands.

But the truth is, the intensity of all the experiences in the ‘Nam made returning to civilian life almost bland and boring. Eventually I completed my BA in journalism, then worked many jobs in fields from emergency medicine to manufacturing to management and finally commercial printing sales and customer service. My last employer was the local county school system, teaching K-5 art. Since 2006, I have been a self-employed practicing artist and private teacher. I love what I’m doing, and feel extremely grateful.

I am in my second marriage, since 1981, to my beautiful and patient wife, Paula. We have three daughters and seven grandchildren between us.

All in all, my experience with Hotel and other units in ‘Nam was, relatively speaking, very positive. These were some of the best guys I have ever known, bound together in common loyalty and support. We were all ready to risk everything for one another in a pinch. I still feel this brotherly bond.

On the other hand, I have nothing nice to say about the war in general, how it was run and how it sputtered out. For years after returning home I watched in complete dismay at the fall of Saigon, the NVA takeover, the re-education camps, the horrendous spillover into Cambodia, the boat people, the missing POW’s, the Montagnard refugees, etc. My God - what had all our efforts and terrible losses accomplished? It really broke my heart and added to my continuous inner rage.

But, here it is 2014. Where has all the time gone? Like all my Corpsman brothers, we were bonded into the Marines, and none of us had started this fight. We all did our level best, sometimes against fierce odds. And I remain deeply proud of all those guys and what we accomplished and endured.

The recent 2/1 reunion in Roslyn, VA, was another whole story and a major highlight in my life. So wonderful to see some of those dear old buddies! It was my first reunion ever, and I was fortunate that it was the best. To sit with a few graying (but still tough as nails) Hotel survivors over a beer way into the night, hearing vivid accounts of incidents that occurred 15 feet away from you but outside your immediate focus of action … 46 years ago and some months! Events that you didn’t even understand when they happened!

Now, that’s impressive. I was so pre-occupied with these accounts fresh in my mind on the Veterans’ Day Monday drive back to Greensboro, NC, that I got lost somewhere down east, and had to snap out of my trance, recite at high volume some of my most colorful Marine Corps language, and cut across country to get back on track.

Well done, Gentlemen, and my deepest gratitude! I salute anyone associated with Hotel Co. who might be reading this. Semper Fi – Doc Jack Stone

A guest book for Corpsman ONLY

We have tried to be through and add the names of all Hotel 2/1, 1968 Corpsmen. To be added, a Corpsman must have served in Hotel Company at anytime during 1968.

If we have left someone out, it was not intentional and we ask your forgiveness. Be it you or someone you knew, would you copy the questions below, click on the e-mail link, paste the questions in and give us the requested information? Thanks for your consideration in this matter.

Persons name:
When he served in Hotel:
Where he served:
His e-mail address:
His phone number:
Anything else including pictures, etc:

We have so little modern day information on our Corpsmen. This page is for each of you to update your information. Please start from the time you signed up with the greatest detail on your time in Hotel Company. Then tell us about your life. We are all interested.

Please click here to send your updated information to us. Thanks, and Semper Fi